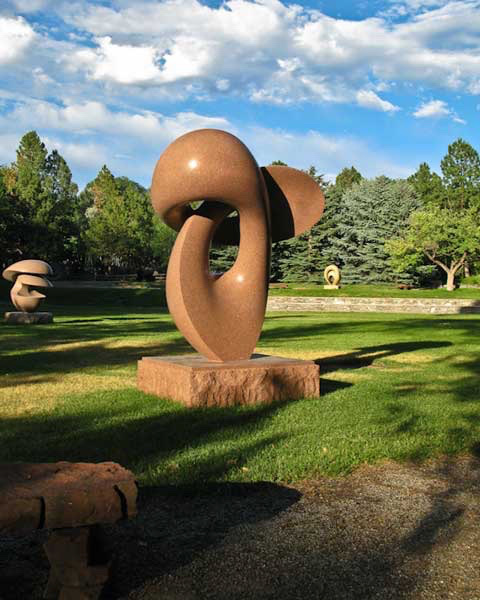 Since its inception in 1966, Glenn Green Galleries (formerly known as The Gallery Wall, Inc.) has presented a wide variety of international artists in their galleries in Phoenix, Scottsdale and Tesuque-Santa Fe, and has sponsored exhibits in Europe, Japan, South America, and Mexico. Their artists have shown their...

You are here: Home / Art / Naissance by Khang Pham-New

Contact Glenn Green Galleries, via the send inquiry button below, for price and availability

Naissance, monumental granite sculpture polished, honed surfaces, Khang Pham-New We first saw his sculptures when they were featured in an outdoor sculpture Biennale in Vancouver with many notable and established sculptors (like Magdalena Abakanowicz, Dennis Oppenheim, Albert Paley, Bill Reid, and Yoko Ono). His work stood out to us and we’ve represented Khang internationally ever since, exhibiting and placing his sculptures in public and private collections for the last 11 years. The response has been amazing. His abstract biomorphic shapes are contemplative and beautiful to view. Khang says: “It is my passion to create monumental sculpture. I invite the viewer to touch and interact with the work. It is especially nice to see small children in and around the large pieces.” Pham-New is interested in the art and form of sculpture as a basis for contemplation and meditation. My childhood experience in the Vietnam War has, paradoxically, become a driving force in my artistic creations. Escaping from the war-ravaged small village in Vietnam at age twelve, my consequent voyage with other “boat people” started my life journey for love in a more humane world. I am impassioned with biomorphic abstract forms. As an artist I am aware of and respect the (art) movements of my time, but to create I remove myself from the influences of the time and retreat into a private space where I can experiment and explore possibilities of each phase of my inner life. I continue to search for an organic fusion between my creative ideas and the abstract form. If such a fusion exists, or a moment of visualizing such fusion is possible, I know it only exists in the long journey ahead. When sculpting, I employ abstract sculpture language to explore human relationships, which to me, are the origin of life. Lines, especially curved lines, fascinate me; they seem to have the capacity for embracing all other lines; forming various shapes. Curved lines are also metaphors, they represent the feminine power in the universe, the nourishing and generating force of all lives. Joining curved lines with other lines, I have created the sacred bond between Mother and her children, compassionate love among human beings, intensive love between lovers, cyclical movements in nature. Many of my sculptures express the self-contained cosmos in its cycle of exhaustion and regeneration. In other pieces I have combined forms in a way that is expressive of relationships between living beings. It is not enough for me that a work of art be beautiful or express emotion: I want my pieces to carry each viewer beyond sensation, into realms of contemplation. Khang Pham was born in war-torn South Vietnam in 1968, the year of the Têt offensive. At the age of 12, together with two of his uncles he joined the exodus of “boat people” in search of a new life. Arriving in a refugee camp in Malaysia, he was separated from his uncles, ultimately to be adopted by an Australian family living in Canada. John New, a professor of European history, his wife Debbie, and their family of eight children (including Khang) were strongly supportive of Khang’s love of art. As early as high school, Khang’s artistic talents started to flourish. With the support of Barry McCarthy, his high school art teacher, (now an acclaimed Canadian painter), an art project revealed to Khang that the medium of sculpture could help him express himself both emotionally and artistically. Khang Pham-New studied at the Ontario College of Art where he majored in sculpture installation. Amongst other venues, Khang has exhibited throughout Toronto at the John B. Aird Gallery, the Queens Quay II Gallery, The Sculptor’s Society of Canada, and at the Pinedale Estates, a private sculpture garden north of Toronto. In 2005, three of Khang’s works were selected to exhibit in the prestigious Vancouver Sculpture Biennale. After almost 20 years, in October 1999, Khang travelled back to Vietnam to be reunited with his birth parents. In his continuing voyage of self-discovery, he began a process of reconnecting with his birth country and culture.

Contact the gallery for shipping and delivery options. Common carriers such as Fed Ex, UPS, US Postal Service and art handlers are contracted for most shipping needs. The customer pays shipping and all applicable taxes and duties.

Returns are accepted for GALLERY CREDIT ONLY, unless defective and must be made within 10 days of delivery at Purchaser’s destination.

A return for this item may be initiated within 2 days of delivery.*
Return Shipping Fee
* Items must be returned in the condition received. To ensure proper insurance coverage, all return shipments must go through Glenn Green Galleries. Any international customs duties and taxes will not be refunded, and returns of customized or made to order items are at the seller's discretion. Return shipping costs are not subsidized and may be higher than the original shipping cost.